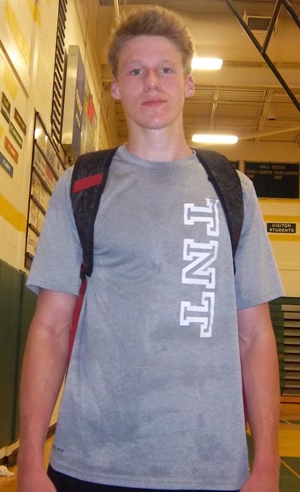 Much improved lead guard is playing with confidence and proving he can be a leader for his team. Campbell is unselfish and a solid defender in his own right. He is strong and determined which will make for a break-out season in his junior campaign. He needs to work on his outside shooting touch and keeping his head up when he penetrates the lane.

Case is the kind of kid you win ball games with, he isn't afraid to dive on the floor for loose balls and when he gets hot he can stick his jumper from anywhere on the floor. He needs to work on his tempo, slowing down and changing speeds to make his drives more effective. He has a tendency to go full force all the time which he needs to temper on offense. He is a winner and a leader for his team.

Good size, great motor, tough as can be are all adjectives to describe the improvement of young Mr. Greene. He has the ability to score from inside and out and uses his length and toughness to become a good defender. He needs to work on his shot selection which can be forced at times and his work off the dribble as he makes himself hard to guard.

This young man is a small college coach's dream. He has solid back to basket moves, can finish over either shoulder or knocks down the short jumper. He has a soft touch, good hands and is overall strength away from an immediate contributor on the next level. He is much more effective in a structured half-court setting.

Youngster showed some moxie battling with the upperclassmen whenever he was on the floor. As with most incoming freshman size and strength is the major hurdle they need to overcome to become contributors. Matt showed a skill level and did not play scared which impressed everyone who commented on his ability.

Another young point guard who has better size and is more equipped for the rigors of the high school game, Gabe is a lefty who has lead guard instincts and can knock down the open shot if left alone. He will need to work on his body of course and tighten his handles as he moves up the ranks in Tennessee High School basketball.

Very impressed with the skill level of this youngster, Clay has length and can score the ball off the dribble or knocking down the outside shot. He will need to improve his strength which could make his forays to the hoop much more effective. He is good on the offensive boards and should be a surprise player in the Nashville area this year.

Much improved inside player is a better athlete than he gets credit for. Kitts needs to improve his footwork and hand strength to execute inside scoring opportunities. He needs to develop a go to move and a counter and needs to spend time in the gym working on his skill level. He has the athletic ability to play on the next level with some serious skill improvements.

One of the better shooters in the area, Graham can knock down the outside shot with anyone. He needs to develop his game off the dribble to make his outside stroke even more of a weapon as teams cannot guard him. Improved footwork will make him a better defender as he has strength and willingness to get after his foe.

Very aggressive ball-hawk defender who when motivated can make life miserable for an opposing point guard. He is slight of build but aggressive on the defensive side of the ball. On offense, Darryl needs to work on his shooting stroke and use his quickness to create scoring opportunities for himself and his teammates.

Bizzle teases you with his skills on an every possession basis; he runs the floor well but tends to stop at the three-point line. He blocks shots in huge doses but needs to work on his strength and positioning to become a better rebounder. He can score inside or off the lob pass when motivated. Once he realizes his potential the sky is truly the limit.

Solid back to the bucket skills from this rising junior post player, Josh has good size, boxes out well and passes out of the double team without hesitation. He needs to work on his quickness and lateral footwork skills to make him more explosive when he gets the ball in the post.

Very small point guard played with effort but was generally physically outmatched at times on the offensive end. He showed a penchant for being a nice help defender and was not a bad shooter when left open. He seems much more comfortable in a structured setting than the free lance style of camp basketball.

Rising sophomore showed a very nice skill level with solid drives to the goal and the ability to knock down open shots. Nichols played hard and has good size for a young player. He will need to work on his quickness, especially on the defensive side of the court; as well as, his handles and foot speed.

Good shooter who was fundamentally sound with his footwork. He ran the floor and used his size to create scoring opportunities in the lane. He will need to improve his quickness against more athletic players and continue to use his length to his advantage on the defensive side of the floor.

Rising junior showed he had the ability to score when open, Coleman seemed to be pressing a bit and never let the game come to him. He forced the issue on several offensive occasions instead of controlling his tempo and finding the right scoring outlet.

Incoming freshman plays very hard and always seems to be in constant motion. He is thick despite his height which helps him score on the interior but as he moves along he will need to develop his ball-handling skills and work on tweaking his shooting stroke. He will be productive because he has a great motor.