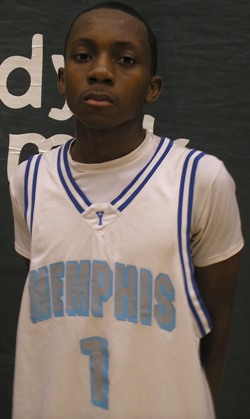 Let's put this thing in prespective.

Orlando is the scene, coaches back on their perch, players ready for the final run of the summer.

Cameron "Solid" Golden (Ridgeway) has taken this information to heart. The sweet lefty turned in a monumental stretch of hoop drama leading his YOMCA 15's to a big 57-52 win over the Atlanta Express.

The win moves the Y deeper into the bracket after finishing their pool play at 3-0.

Golden took control of the game with the YOMCA trailing 48-43 late in the fourth quarter. A sweet assist to a cutting teammate then a steal off the inbounds pass and a converted putback. With the score now at 48-47, Golden drills a three from the left side then tops it off with another quick bucket and the YOMCA never looked back.

Golden would finish with 12, Martavious Newby (BTW) added 11 and Kadario Fleming finished with 10.

Over in the 16 and under division of the Showcase the Memphis YOMCA also stands with an unblemished record at 2-0. Andre Hollins (White Station) and Watne Martin (Mississippi) have led the charge for the blue and white clad Memphians.

The Tennessee Travelers 16's stand at 1-1 with an impressive 53-52 win over the Smyrna Stars. Galen Campbell (Fulton) led the way with 16. Rico White (Bearden) added 12.

In the second game a White layup off a sweet inblunds play tied this one at 74, before the Travs fell in overtime 92-85. White was sensational finishing with 28 points. Campbell added 21. Kurt Brooks (Cocke County) and Nathaniel Hughes (Hampton) both finished with 11.