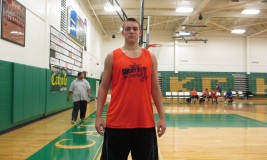 Putting the hours in.

Your nose to the grindstone.

Whatever cliché you wish to use the undeniable fact of the matter is that the boys at Bryan College are doing work.

The Lions fresh off a season where they finished a modest 15-15 the staff is very excited about the new year.

They return majority of their offense led by NAIA All-American Brandon Cole and a host of players who gave significant minutes.

Now look no further than the signing day parades all over East and Middle Tennessee and you will see the Lions and venerable coach Don Rekoske made their presence felt in a major way.

The Lions, who play in the Appalachian Athletic Conference of the NAIA, bring in 12 new members of the hoops family to integrate with the returning players.

Geographically speaking the school cars accumulated many miles as the Lions ventured to Middle Tennessee to snatch a Mr. Basketball finalist in Derrick Spears (MTCS).

Spears brings a deadly outside stroke to the Bryan College campus.

Staying in the Middle Tennessee landscape the Lions added Levi Sutton (Sycamore) to the Lion family.

Continuing down I40, Crossville was the destination for the Lion staff as they snatched three from the city including Logan Parsons (Cumberland County), Tyler Yoder (Stone Memorial) and Luke Matthews (Stone Memorial).

Yoder is a huge get for the NAIA school with his deep range and long athletic form, he should be a hard guard for many AAC foes.

Onward and upward towards Knoxville with a quick stop to sign Clay Jenkins (Loudon). Small guard with a lot of heart.

Otteriah Lee (CAK) was the prize awaiting the Lions in Knoxville. The 5'9 guard is the schools all-time leading scorer and will take over the point guard duties the minute he sets foot on campus.

While in K-Town the Lions went ahead and brought Isaiah Campbell (Bearden) into the fold. Campbell was actually the first of the dirty dozen to pledge his wares to the Lion staff.

Jumping on the parkway the Lions go out and sign Nico White (Alcoa) before a trip up to the Atomic City to grab a pair including Xavier Maddox (Oak Ridge) and Birdman McKamey (Clinton). Maddox has crazy upside with his athleticism and length while Birdman is a straight up shooter and competitor.

The last stop on this magical mystery tour concludes in Jefferson County with arguably the crown jewel of the class in Brice Cusick (Jefferson County). The big man led the Patriots to the state tournament and will be a welcome sight on the opposite block as Cole continues to work his magic next season.

This group has been dubbed the "Dirty Dozen" by this writer and will become familiar faces to Bryan College fans for many years to come.