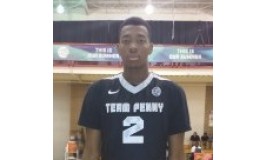 This is also the forum to announce milestones including 1,000 point scoring efforts and such. Please let me know if we miss any of that information. You can email me at andre@tnprephoops.com

Lucas Campbell (CAK) put his name out front in the record books for the Warriors scoring 38 points in a win over Grace Christian. The 38 points constituted a school record for points in game. Campbell started the week in good fashion dropping a 25 spot on district foe Kingston.

After losing a cavalcade of seniors last season the Cubs of Cheatham County were not expected to make such noise in the mid-state area. State ranked and leading their district the Cubs are ready for the post season behind the scoring exploits of rising junior guard Austin Douglas (Cheatham County). Douglas had a very productive week scoring 25 against White House and closing the week with a cool 32 against Sycamore.

School records are meant to be broken. Jordan Bowden (Carter) scored a school record 54 points leading Carter past district foe Gibbs and establishing himself as the record holder for most points in a game breaking the mark of current ETSU junior Lester Wilson.

Julian Daughtery (Millington Central) is a name not very familiar with the folks around the state yet after his scoring exploits this week they should get to know him. Daughtery began the week scoring 43 points against Arlington and concluded the campaign with 35 large against Bolton. Now that's production.

Maverick Smith (Oakdale) was not about to let his team lose. The rising sophomore wing knew he was in a battle and kept making buckets to get his team past district foe Oneida. When all the dust had cleared Smith finished with a career high 40 markers.

A couple of hot shot juniors made their way onto the 1,000 point list this week. Tyler Byrd (Notre Dame) has been a fixture on this list every week while Ross Cummings (Creek Wood) is dropping buckets for one o the two unbeaten teams left in the state. This week was good to both young men as they surpassed the 1,000 point barrier for their respective schools.

LaGerald Vick (Douglass) and his teammates experienced some bad news earlier in the season when some of their wins were taken away but it hasn't stopped the SMU commit from piling on the points as the playoffs await around the corner. Vick began the week slow only dropping 31 against Trezevant but then picked up the pace with a 42 spot against Manassas to close it out.

Kobe Kelly (Grace Christian) filled out his resume and is daring anyone to challenge him for district MVP honors. The senior football star had himself a big hoops week scoring 28 points in a district win over Harriman then adding a hard fought 34 as the Rams fell to Class AA CAK in overtime.

Will Alexander (Maplewood) 39pts vs. MLK