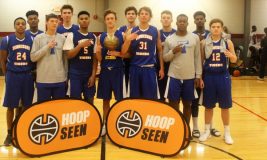 Atlanta was the place to be this weekend with several events dotting the Peach State landscape including the Atlanta Jam/Hoop Seen event, On the Radar Hoops/Sweet 16 Session I, Lineage of Champions in Augusta and Battle of the Best in Atlanta.

At the Hoop Seen Atlanta Jam the Tennessee Bobcats picked up where they left off last season finishing 5-0 and capturing the Grey Division title with a 73-67 win over AC/GA. Tyreke Key (Clay County) impressed with 28 in the title game and drew the eyes of several coaches including scoring offers from Furman and Tennessee Tech. 2016 Seth Battle (Sweetwater) added 16 in the title game victory followed by Chris Clayton (North Carolina) with 13 and 2016 Cade Crosland (White County) who finished with 11. Key and Battle were named to the All-Tournament squad.

Key started the event with a 24 point effort in an opening game victory over the Florida Elite. Battle added 18, 2016 Brenden Coleman (David Crockett) pitched in with 12 and Clayton added 10.

The Bobcats moved to 2-0 with a bashing of the Atlanta Warriors behind 17 from Key and 16 from Crosland. Battle added 14 and Justin Barnett (Sevier County) pitched in with 12.

Key scored 19 as the Bobcats got a fight from the MBC-Elite but eventually prevailed 58-54. Crosland added 12 while Morgan McKay (North Carolina) tossed in 10.

The Bobcats moved to 4-0 with a 71-61 semi-final win over the Florida Elite behind 19 from key and 14 from Battle. Coleman added 11 while Crosland and Clayton pitched in with 10 apiece.

The Tennessee Tigers had a massive showing at the Atlanta Jam taking home the crown in the White Division with a 55-43 win over the Douglas Brothers Elite. The Tigers finished 4-1 losing their opener to the Wellington Wolves but bouncing back with four straight wins and the title.

Caleb Hodnett (Aaron Academy) was the star of the title game with 31 markers and played well throughout the event. Garrett Sanderson (Alabama) was outstanding with his timely shooting and the Chattanooga duo of Seth Clark (McCallie) and Max Shulman (McCallie) proved to be as good as advertised. Clark was a monster on defense blocking shots and scoring on the interior while Shulman played well from the perimeter.

Nate Boyd (Tennessee Christian Prep) and Laino Walker (Springfield) provided big time athleticism and timely scoring. Boyd shined in the semi-final win over the Chandler Parsons squad from Florida scoring 8 late points in the win while Walker showed he could play inside or out. P.J. Grooms (Franklin Classical) was dynamite from the outside while 2016 Dequan Summers (Hillwood) was his usual self playing defense and making plays.

ON THE RADAR HOOPS/SWEET 16 SESSION I 17U (TENNESSEE TRAVELERS)

The Travelers made some large noise during the live period finishing 2-1 at the On the Radar Sweet 16 Session I event in Atlanta. A unique format with four groups of 12 teams divided into pools had four eventual champions. The Travelers made it to the finals of their pool. The trio of Tajoin Jones (Oak Ridge), E.J. Bush (Oak Ridge) and Shaquan Gibson (Oak Ridge) drew massive attention from the coaches in attendance.

Jones finished as the teams top scorer at 22 per game and garnered interest from several schools including Tennessee Tech and Appalachian State.

Bush, who averaged roughly 18 per contest, was a feature attraction for the attending coaches as he drew an offer from Navy and real interest from several schools including College of Charleston, Charleston Southern, South Alabama and Appalachian State.

Gibson also contributed around 18 per game while playing through injuries we have to mention the effort and contributions of Kurry Cody (Cosby).

BATTLE OF THE BEST/ATLANTA 17U (EAB ELITE)

EAB Elite made the trek to the Peach State finishing 3-2 in the Battle of the Best in Atlanta. EAB fell 77-74 in the gold bracket semi-finals to Team USA United from North Carolina.

Hunter Vick (Camden Central) led the way for EAB averaging 17 per contest with a team high 24 points. Diego Womack (Jackson Northside) finished at 14.8 per game with a game high of 20 points.

EAB placed five players in double digits for the event including Resean Taylor (Northeast) and Jontae Brown (Northeast) at 11.2 per contest and Clay Washburn (CPA) who finished with a 10.2 per game average including two games of 16 points.

This Chattanooga crew made some noise advancing to the title game before falling to a powerful South Florida Elite squad. NLP scored wins over EOTO (53-47), Team Intensity (70-38), Pro One Select (77-69) and Game Speed Nation (64-40) before the title game loss.

K.K. Curry (Cleveland) drew the most attention with his length and athletic skills. He was recognized as one of the top players in the event and didn't disappoint with several highlight dunks and some improved outside marksmanship. Patrick Urey (Baylor) is rounding into his healthy self again with a big effort here in Atlanta. The coaching staff was thrilled with his effort as he gets his confidence back. Jesse Walker (Brainerd) used his stout body to score on the interior and hit the glass hard for the NLP crew.

The staff was particularly excited about the contributions of big Jason Jitobah (Hamilton Heights). having dropped some weight the big man was large on the interior grabbing boards and rejecting shots. His improvement has been ten fold according to the coaches. Jalon Baker (Baylor) was also mentioned for his efforts this weekend.

The Elite started strong with a nice 72-70 win over the eventual champion South Florida Elite in a showcase contest but stumbled, falling 48-46 in a battle with the High Point Havoc. The loss dropped the Elite into the losers bracket where they proceeded to win three straight and finished strong at 4-1.

Leading the way for the Elite was the guard play of Jeremy Elston (Tyner Academy) and Justin Dozier (East Hamilton). Mac Hunt (McCallie) was solid from the perimeter while inside the Elite got maximum effort from the duo of Jordan Starling (McCallie) and Jay Gibson (McCallie).

The Tigers lost a tough one to the Georgia Stars 68-66 despite some sterling guard play from the likes of Jaden Lewis (Summit) and Gray Michael (Franklin Classical). Lewis averaged in excess of 10 markers per contest and ran the show for the Tigers. Michael dropped a team high 24 in the opening game keeping his status as one of the top shooters in the state in any classification.

Guard play was strong for the Tigers with solid efforts from Bryce Watts (Franklin Classical), Christian Choice (Northeast), Will Midlick (Rossview) and Austin Jackson (Rossview), who notched double digits fresh off the pitching mound on Friday.

Inside the Tigers got solid production from the likes of Wesley Hennis (Providence Christian), Nonte Davis (Columbia Central) and Dalton Coleman (Monterey).

LINEAGE OF CHAMPIONS/AUGUSTA 16U (EOTO)

A scheduling conflict forced the EOTO into this alternative event where they battled "the elements" to finish as the runner-up despite playing three game almost back to back.

Others who's contributions were mighty include Jack Sompayrac (Knoxville Catholic) and Tykee Ogle (Alcoa).