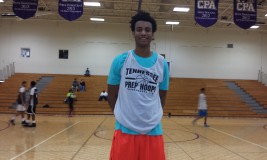 Evan Ragsdale (CPA) got the Lions off to a roaring start draining a couple of deep daggers before Hoover settled in a made a run at the Tennessee powerhouse.

CPA led 30-21 at the half and received some inspired minutes in the third quarter from Western Kentucky football commitment Parker Howell (CPA) and Sam Johnson (CPA). Howell would finish with 9 big points and Johnson added 7.

Ragsdale was the only other Lion in double digits with 10.

The day started with the Spartans of White Station falling to one of the top teams in the state, Birmingham Ramsey 75-56.

The Station started strong but were unable to overcome the size of Ramsey.

Nych Smith (White Station) led the scoring charge with 28 points on 8 of 17 shooting from the field.

In the second game the state of Tennessee got into their winning ways as defending Class AAA state champion Blackman held off a hard charge from a scrappy Mountain Brook Academy squad 56-46.

Jacob Nelson (Blackman) led the Blaze with 16 followed by Cedriontis Wilson (Blackman) with 15. Christian DeWitt (Blackman) got into some early foul trouble but still managed a workmanlike 12 markers.

Foul trouble was a monster as the Blaze were without their leader Isaiah Hart (Blackman) for a good portion of the game.

Hart, Wilson and some help from sophomores Jaellan White (Blackman) and Donovan Sims (Blackman) were gigantic in controlling the MBA press and getting the Blaze into their offense.