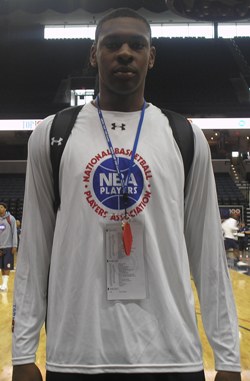 Philadelphia is the site for the 2009 Reebok All-American Camp.

Once again the state of Tennessee is well represented with four players attending the event.

Joe Jackson (White Station) has continued to dazzle all who dare watch him hoop. The dynamic point guard was named as one of the camps top players thus far as he continues to be a special force this summer.

Tarik Black (Ridgeway) has taken complete advantage of his summer also being named as a camp all-star and increasing his already burgeoining stock to high return dividends come August.

Mardracus Wade (Mitchell) has proven he belongs in the conversation when we talk about, not only the best players in the state, but the best at his position in the nation. Defense got him on the map and now he has proven to be a capable scorer in his own right. Love the Drake!!!!

Bobby Parks Jr. (St. George's) has turned some heads with his ability to shoot the deep ball and score off the explosive move to the bucket. Look for continued bright things from this youngster as the summer continues to roll along.

Congrats to all the Reebok campers and I will see you Wednesday in Memphis.