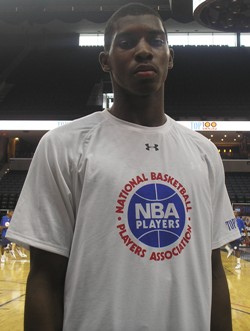 Action was finding its way all over the Finch Center on Monday as the inaugural River City Showdown tipped off.

The Nashville Celtics got things rolling beating the Memphis Magic 83-77. Casey Prather (Jackson Northside) was outstanding with 18 points and 17 boards. Austin Hollins (Germantown) led the scoring with 21. Levon Tate (Siegel) was huge finishing with 17 points and connecting on 4 of 4 from three, while Meiko Lyles (USN) added 13.

In their second game, Prather dropped 26 as the Celtics slipped by the D1 Louisiana Ambassadors 91-87 in overtime. Hollins added 14, Lyles 13 and Ish Sanders (Cleveland) finished with 12.

The Magic came back from their early defeat to beat M33M in the afternoon session. Joe Jackson (White Station) was his usual outstanding self, scoring 25 in the early game. Tarik Black (Ridgeway) added 18 and Adonis Thomas (Melrose) finished with 14.

M33M opened with a win over the D1 Louisiana Ambassadors before falling to the Magic. Mardracus Wade (Mitchell) was his usual steady self and newly acquired "King" Arthur McMillan (Hillsboro) played well.

The Mid-State Ballerz, fresh off a championship at the Peach State Classic, started this one 2-0 with wins over Higher Limit and a tough 77-74 victory over Memphis Select. Cordero Williams (Liberty Tech) led the charge with 20. Providing scoring assistance were Kaneal Windom (JCM) with 15.

Randolph was the high man in both the early victories, scoring 21 in the opener then 25 in the second contest. In the opening game, Anthony added 13 while Whit Thornton (MUS) finished with 12. Anthony also ended with 12 in the second game.

Will be driving up to Memphis tomorrow for the finals on Wednesday, look forward to seeing the exciting final day.