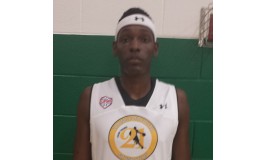 As one of the top summer programs not only in the Memphis area but in the entire country Team Thad, a program headed by NBA star Thaddeus Young, it came as a huge surprise that after 17 D1 signees in the past few seasons that the hometown Memphis Tigers were yet to be included in that group.

That is until now.

Nick Marshall (Lexington) the very improving big man will make the short trek from Lexington down to Memphis next season and play for Coach Pastner and the Tigers.

Marshall, a stalwart on the Team Thad juggernaut, is a mobile big guy with a motor and a major, major upside recognized by many as he chose the Tigers over offers from Indiana and Tennessee among many others.

His improvement over the years has been dramatic and his willingness to take coaching and work on his weaknesses makes him a player that opposing American Athletic Conference school will have to deal with for many years to come.

Marshall is the 4th player from the Class of 2015 to pledge his wares to D1 and the second in this class to choose the Tigers joining the elder Lawson brother as future member of the Pastner crew.