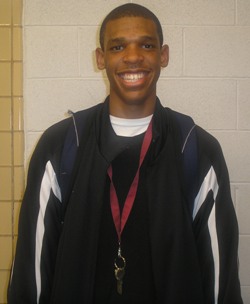 Belmont captured their second Tennessee hoopster on this day when Blake Jenkins (Bearden) decided to end his college process and chose to play for Coach Rick Byrd and the Bruins of Belmont.

Jenkins, who helped Bearden into the 2009 state tourney, was a much improved player his enior campaign. Showing the hustle and dedication on both ends of the floor made his value skyrocket as the hoops season trudged along.

The 6'6 wing can score off the dribble, is very good in transition and has improved his outside shot to where it is a weapon as well.

The Bruins missed making the NCAA tourney this season after losing to ETSU in the league championship game. If you recall the Bruins were a missed shot away from besting heavyweight Duke in last years tourney.

Jenkins becomes the second Bulldog to pledge D1 as his running mate Dustin Craig (Bearden) did so earlier in the season.