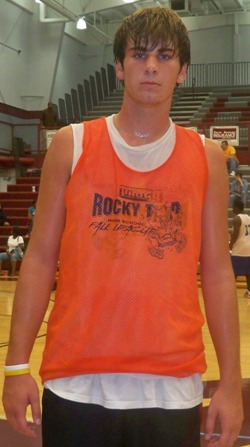 Two tournaments in one day, nine games in two days. I love the holiday tourneys.

Logan Lyle (Unicoi County) scored 23 points leading Unicoi County past Sweetwater in the opening game of action on day two of the Pilot Christmas Tournament. The King College signee was outstanding knocking down contested jumpers, blocking jump shots and throwing down a nice one-handed baseline dunk late in the game.

Tres Palmer (Powell) came up with a timely late bucket leading the Panthers to a hard fought 50-48 victory over the Blue Raiders.

Palmer, who finished with 14 points, scored late to put the Panthers up for good. The big man also snared double digit boards and showed his passing prowess out of the post with several assists.

Next stop Bearden High School for the Super 16, semi-final rounds.

Balanced scoring and substantial depth proved to be the difference as Bearden knocked CAK from the ranks of the unbeaten with a 83-54 victory. The win moves the Bulldogs into the finals tomorrow against unbeaten and district foe Knoxville West.

JayJuan Mitchell (Knoxville West) scored 22 points leading the Rebels of Knoxville West to a 73-53 win over the Tornadoes.