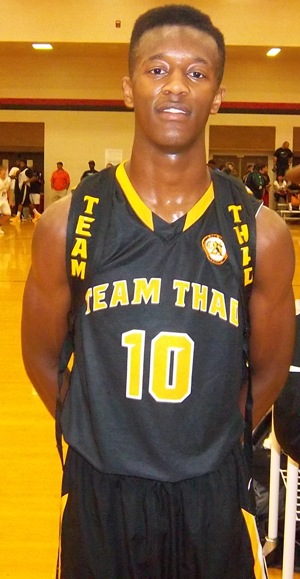 Here in Augusta. Cinderella story. No wait that was another movie in this episode Memphis ventures down to the city of Augusta and makes it their....own.

Action concluded this weekend with the first of the three "live" periods in the books.

Team Thad finished the Peach State Showdown at 8-0 but with scheduling conflicts was unable to participate in the late finale against teams they had already defeated previously.

Chris Chiozza (White Station) was at his best in the final contest for Team Thad notching 18 points and 10 dimes against the South Carolina Raptors who held a 38-14 halftime advantage before Team Thad proceeded to thoroughly thrash them in the second stanza.

Riley Norris (Alabama) continues to increase his level of offers and the coaching staff was quick to point out the undeniable contributions from rising sophomore Jaylen Fischer (Bolton) and Jamerio Jones (Melrose).

C.J. Anderson (Whitehaven) played his best event to date according to coaches as the 6'4 senior guard was visible on the defensive end and scored key buckets during second half runs for Team Thad.

Across town at the Nike EYBL Peach Jam, Team Penny was making headlines of their own. When we left you last the Bluff City Warriors stood 3-1.

Team Scan received the wrath of the last second defeat to the tune of 67-66 behind 18 points from KeVaughn Allen (Arkansas). The Lawson responded with 15 from K.J and 12 from Dedric in the win.

Advancing to the final four of one of the most prestigious events in the country in no small feat for Team Penny. The eventual champion E1T1 defeated the Memphis crew 102-80 despite 25 and 15 from the rising sophomore sensation known to us as Dedric Lawson. Allen pitched in with 21 and the elder Lawson brother finished with 17.

Team Penny could not have advanced this far without significant contributions from every member of their squad including Dillon Mitchell (White Station), Keon Peoples (Ridgeway), Davell Roby (White Station) and Joseph Williams (Lausanne).