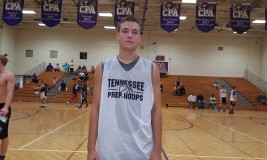 Strong bodied youngster who has a superb feel for the game. Coe is a decent outside shooter but seems to have made this his bread and butter. His shot selection and decision making need to be upgraded because this should not be the primary focus of his game. He can score off the dribble, he is strong and can get to the lane and should use his outside shooting touch to give himself more avenues to score. His moves need to be quicker and when he does drive to the bucket he likes to take the long way instead of getting to the front of the rim. He needs to improve his quickness and lateral speed but this is a kid who is a very productive player, a volume scorer and a basketball gym rat. When he puts it all together he will have a spot somewhere on the next level.

Scrappy player who showed that when left open he could shoot the ball and make some plays. His shooting touch is rather unorthodox but he makes more than he misses when his feet are set and his shooting fundamentals are followed. He is what we call an opportunistic player, he gets loose balls and turns them into buckets, he seems to come up with the ball in scrums and keeps possessions alive. Defensively he really needs to work on his explosion and athletic conditioning.

Intelligent player who has a solid shooting stroke and a good motor on the defensive side of the ball. He picked his shooting spots well never forcing the issue and showing a very quick release, he moved his feet very well on defense and played with passion. He plays with a motor but I would still like to see him be more aggressive on the offensive end, more plays to the rim, more drive and dish, more use of his shooting prowess getting defenders to respect your entire game. He obviously needs to get stronger, something you can project with just about every player who attended the showcase This added strength will give him more perspective and allow him to take his game up another notch.

"Flat out fun to watch" was one evaluation of this rising senior. Smith took this camp by storm and made it his own. Fundamentally sound on both ends of the floor, he showed the ability to score over either shoulder, he had a very nice face-up game and showed he could knock down the short jumper. He controlled the paint, he crashed the boards, he hit open shooters and was simply one of the top players in attendance. His strength has improved but will need to continue to develop for the next level, he will need to work on his quickness and explosion as he prepares for more athletic players in the post. This kid is a steal for any small college he comes to the contest already well coached and prepared. Love him.

Vocal leader who plays with a chip on his shoulder, a good chip. He is mentally tough, he is hard-nosed and his future is bright. Cam has very good footwork and solid ball skills. He uses the jab step and rip through to gain offensive position before putting the ball on the floor, creating space and getting into the flow of the offense. His shooting touch is good but could continue to use more gym work. He needs to learn how to play without the ball, utilizing his first step to get open and continue the flow of the offense. As is the case with most lefties he will need to work on his right hand, for at the rim finishes keeping defenders at bay. He is a vocal player, which is a trait coaches love, he talks to his teammates, he calls out switches and communicates throughout the possession.

Smart, good body, tough...all great adjectives and attributes for a player who has yet to play a high school basketball game. Nease is one of those special kids who will see varsity action from the jump. He pushes the ball well when he is thrust into the lead guard role his shooting is ok but he will need to remain in the gym and make it a weapon of consistency as he moves up the hoop chart. Another lefty with a dominant hand, not a surprise they are that way. He is not afraid to mix it up. Id like to see him more aware on the defensive end, I think that will come with time and effort, he's probably never had to guard before. As he matures and gets his body ready for the rigors of high school basketball we will have a pretty good one in our midst.

Talented young point guard is a smooth operator. He can score the ball and has a really nice shooting touch when left open. He can take the ball to the bucket but often times his lack of strength plays a role in the outcome of said drive. You will see a massive rise in productivity when this young man gets some actual strength in his body, he sees plays yet doesn't have the size to execute them at times. He has a tendency to take his eyes off the play, he turns his head when he penetrates to the basket and gets lost to where he is going. I really like his overall game, he is smart, talented, coachable and wants to be a good player. I think his best basketball is right around the corner. He is productive without this added strength, he's a different kind of player once he makes this transition.

Young guard has a good understanding of the game, he doesn't look to score that often but his shot wasn't all that bad and should be something he works on to make his overall game more complete. He fought hard on defense despite lacking overall athletic skills. He's a fighter, a scrapper who makes up for his shortcomings with intelligence and effort. He was quite productive and arguably the best rebounding guard in the camp. He was voracious on the boards, despite his lack of size inside. He led the break was cognizant of the post entry and three-pass rules and played like a well coached gym rat who just loves to be on the floor.

Young man has come back from some injuries and is working his way into a very competent player. Taye has good length and size but needs to play with a bigger motor. He is productive, scoring on the interior and from mid-range but his game will grow exponentially when he increases his aggressiveness and toughness on both ends of the floor. With his skill level and body type this is the player that coaches covet. His shooting stroke is good and he makes buckets but his release is slow and debilitating. When the competition level increases he will never get that off until he speeds up that form. He needs to make better ball decisions and utilize his gifts to create more opportunistic scoring chances. This kid has the potential to be a very good player. Only time and effort will tell.