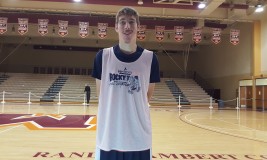 Solid offensive contributor showed he could score from the perimeter; as well as, off the dribble. He showed range out to the three-point line and has a very good face up game, he gets his shot off quickly which is an advantage against bigger and more athletic guards. He showed he could put the ball on the deck and finish in the lane with a quality floater. His quickness and lateral speed will need to increase and he needs to make a much more concerted effort to play harder on defense. He has good length and should be a more capable defender than he is showing thus far.

Diminutive guard showed no fear as he battled the older and stronger kids during the camp. He will obviously need to get stronger as will every kid in his class. He has a tendency to over dribble, compensating for his lack of strength. He sees plays but does not have the body mass to execute at times leading to turnovers or excessive ball handling. He showed a penchant for getting into the lane and dishing out for the open three. He will need to become more assertive from the lead guard position and play with more emotion. His offensive will come when he gets stronger and develops some confidence in his scoring abilities.

"Very high ceiling" stated one of the evaluations for this rising sophomore. K.K. is a long and smooth athlete, he loves to push the ball up the floor, finishing at the rim, he passes equally well with either hand and is what we call a glass eater on the boards. He gets to the rim at will in the half-court and is a finisher. His outside shooting needs some work, his release is awkward and his trajectory is low. Another area he can improve is his on the ball defensive effort. His length dictates he should be a much more productive defender. He crashes the boards without hesitation and once motivated I think he will be an outstanding defender. A really strong young prospect for this class.

Big guys always garner more attention and Bradford was no exception. He battled in the half court preferring to score over his left shoulder, he showed he could score from 15' out, displaying solid fundamentals keeping the ball high and knocking down some shots. Its nice that he can score from the perimeter but my 6'8 guy needs to show me some love in the paint. He really needs to work on his touch around the goal, his footwork and taking advantage of his size and please get more aggressive on the glass. On the defensive side of the floor is where he can also make a great deal of improvement. He showed some solid offensive skills and if he really works could be a very functional player this season and next.

Small guard plays in constant motion, he likes to defend but his size often gets him into predicaments in the paint. A lefty he is not afraid to launch the ball from the perimeter. He is a solid shooter when his feet are set and he gets his shot off with little to no room with a quick release. He obviously needs to add strength to his body, as a small guard he needs to try and mix it up more inside. He is strictly a perimeter player right now and part of that is his lack of strength and confidence to get it inside among the larger players. As a lefty you have a natural advantage and we encourage you to continue being a shot maker just consider that at his size he will need to work on his lead guard skills, passing, decision making and getting his teammates involved in the game.

Much improved big man who plays with a big motor and gives the appearance that he truly loves the game. He has good bounce around the rim, a nice jump hook for his go to move and a solid spin move to the front of the rim for his face up to score. He creates good angles to score quickly. "Awkward but bouncy, but I love him" was one of the evaluation quotes for the Grainger grinder. His footwork could use some additional tweaking, working on defensive positioning and using his body to continue to be more aggressive on the offensive end. His length and desire make him a solid rebounder and he hustles and guards on the perimeter and in the paint. If his progression continues here is a kid who will catch the eye of some coaches down the road.

Hard nosed competitor who delighted the evaluators with his aggressive forays to the hoop. "Strong with his moves" and "bulls his way down the court with the ball in transition" were two of the comments from the evaluators on his game. His offensive skills seemed to catch some attention including how he used the basket as a defender when finishing on the other side. He didn't really show much of an outside shot instead opting for the drive, as a guard that is an area he will certainly need to address. Defensively he used his aggressive nature to maintain position but was out of sorts when a quicker or more physical player entered the fray. He is tough youngster who should see marked improvement as he works on his shooting and defense.

Very good teammate, plays cerebral, talks on defense and works hard. When the game slowed down he was in his element, leading his charges and making plays with his effort. When the action got a little faster and quicker he had trouble keeping up. He needs to work on his explosion and moving his feet laterally on defense. He didn't shoot the ball much as he preferred to run the show despite being listed as a two guard. His work ethic dictates that he will work on his deficiencies, concentrate on making the outside shot a weapon and continuing his strengths and leading his team and being a coach on the floor.

Youngster played hard at both ends of the floor and like everyone else in his class he needs to start now by getting tougher and stronger. He spent most of his time on offense on the perimeter, he will need to get a little more active inside. He made some smart plays, passing into the post, until you are stronger always use both hands on the pass, some of those weak ones resulted in turnovers. He had a hard time with pressure when he had the ball something that time and strength will also help solve. He didn't back down, he gave effort and that's about all we can ask from the kids who have yet to even play a high school game.