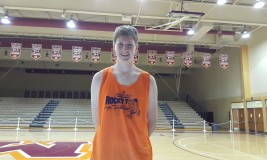 Young scrapper who gave plenty of effort on both ends of the floor. He had some trouble early adjusting to the speed of the game and the athleticism of some of the players but he was able to figure out how to contribute as the camp progressed. At his size he will need to learn some of the skills associated with running the point, his shooting was adequate but could always use more gym work.

Smooth wing with a much improved overall game, Ervin has increased his skill level in all aspects of the game. His shooting has become a weapon and he has worked hard to increase his ball skills. He has good length and size, an increasing motor and has shown a growth in his athleticism as well. He will still need to work on his upper body strength and becoming a better defender. He is much to good an athlete to be an average defender. To his credit his effort has improved but not yet to the point where he will be down the road. I think this young man has potential written all over him and as he continues to grasp the nuances of the game his worth and value towards the next level will only rise.

Tough kid who is not at all afraid to mix it up inside on the defensive end of the floor. He fights for position, he pushes for rebounding space and he is physical. Will has become strictly independent on the three for his offensive production. On offense he drifts toward the perimeter and launches shots. His shot selection leaves a little to be desired but he is capable of knocking some down as well. At his size he absolutely needs to work on his ball skills and get some off the dribble action into his offensive playbook.

Much and I much improved player from even where he was at the beginning of the fall period. His tendency on the offensive end of the floor is to drift to the perimeter and shoot. A lack of inside strength may be one symptom of this need because he is not an awful shooter, his wind-up and release needs to speed up dramatically and his shot selection needs to fall into the flow of the particular offense he is a part. He has moments of displaying a real motor but lacks the consistency and possibly the cardio to keep this up for long periods of time. A lefty who has shown he can be a viable scoring option from the block if someone would just take the time to make this a priority. He rebounds in traffic when motivated but gets beat to his spot and out hustled when he is not. Consistency dramatically changes his level and future success.

Young man has yet to play his first high school game. Every evaluation seemed to contain the same adjectives: slick, smooth, creative, smart, fearless and quick. All of the above are true and I am excited as we watch this young talent develop. A true point guard, Hendricks has vision beyond his years, he sees cutters and has a dynamic first step and gets to the rim for tough finishes. He takes defense personally and is a guy you wish would guard someone else if your the offensive player. His shooting really needs to improve as he likes to launch from deep. His form needs tapering and his release is very high. He is slight in stature but not weak, as he gets stronger he will continue to get even more productive. Bright future for this 2019 prospect.

"If he grows I believe we have something here", was one of the several positive comments concerning this rising freshman. Small in stature but not heart, Glover is a disrupter. He gets underneath ball handlers and causes turnovers, he has a very good skill level and is not afraid to take the ball to the bucket. He will need to work on a runner, something every small guard should possess and become more confident with his outside shooting touch. He sees the floor in transition and isn't afraid to advance the ball down the floor. As the lead guard his decision making will need to improve, he makes good plays and spectacular plays but we also need him to make the easy play. He needs to work on controlling his tempo, quick is great but changing speeds is devastating.

Small scoring guard plays with confidence and is active on the floor. His best asset seems to be his ability to score from the perimeter but he has a tendency to try and do too much with the ball and that action often leads to turnovers. He has a decent skill level, like we mentioned his shooting stroke is solid but his release is rather low, he will need to get that higher as he ascends into more varsity action. As with most youngsters he needs to work on his overall strength, this will lead to better decisions with the ball and the ability to be a competent defender which will get you on the floor.

Another small guard that needs to become more versatile and learn to play some from the lead guard position. Yates is a competent shooter but he lacks confidence in his overall game. He sulked when he missed shots and let it affect the rest of his performance. When his feet were set and his form was on point he was a really good shooter that could help his team this season. He needs to learn how to work without the ball and work on his quickness and lateral skills. Those will be vital as he attempts to guard athletes from his district and region this year.

Very nice young player who will be a force this season. Patrick has good size and skill, he has an endless motor and an emerging offensive repertoire. He is a good athlete who will be held to a higher standard because of his potential. In the post he needs to hold his spot, stop drifting on his scoring chances and just become more consistent. On the defensive end he really is ahead of the game, he fights for rebounds, he runs the floor, he has a solid outlet pass and he can finish on the secondary break. He needs to get his handle tighter, keeping the ball closer to his body when he gets position in the post. A go to move with a counter is the next evolution for this emerging talent. Adding some perimeter skills to his game will only increase his skill level in the future, his outside shooting is adequate but can improve.