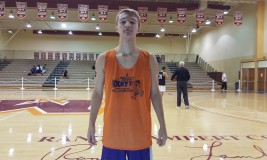 Smooth rising junior has been playing with some extreme confidence. Slick lefty stroke he has the moxy to pull from anywhere and gets his shot off quick. His size will dictate that he needs to add some point guard skills to his basketball arsenal. He can pass the ball but will need to make better decisions in the half-court when playing the lead guard spot. He is a scorer and he needs to continue to add strength to his frame. He likes to shoot the long ball but will need to add some dribble moves to his game to complete the spectrum. "The weight room is your friend, but man I love this kid: was one evaluation of Justin and too a man getting stronger, staying focused, keep the high confidence level were bounded about when describing young Mr. Barnett.

Tough kid who showed some solid basketball instincts, he likes to shoot the ball and when his mechanics are good he's not a bad stroke. He has a slow release and the trajectory can be flat when his shot is rushed. He will need to work more on scoring in the lane and providing buckets from more than just the perimeter. Defensively he has a tendency to coast and does not contest shots. He has the basketball IQ to be much more effective on defense using his smarts to cut off angles and anticipate passing lanes. Every evaluation mentioned a renewed commitment to defense will do wonders for his overall basketball pedigree.

Competitor with a good body and decent size for a wing. He plays smart and has a better than average motor. "Tough as nails" said one evaluation. His shot is kind of flat so he will need to work on getting some elevation on his release, he showed a step-back that proved effective and he makes the transition from defense to offense very quickly, charging the ball up the floor. He should get a little more consistent at finishing at the rim and making better decisions with the ball in the half-court. He has a good motor and is a willing defender but he found just enough time to coast that it got noticed by a couple of the evaluations, so cut that out as quickly as possible.

One of the pleasant surprises of the camp. Small but burly lead guard showed no fear on either end of the floor. A willing defender he uses his strength to get into his opponent and he has good anticipation skills that allows him to make some steals on the backside of the pressure. He attacks the rim from every level and he knows how to finish. He can use either hand to score at the bucket and will make the nice dish to a grateful teammate as well. His outside shooting will be a place he needs to spend some time working on his craft. He tends to dip the ball when he shoots making his release slow and low. He was praised for his toughness and ability to attack the rim by every evaluation on the board, but each one also mentioned how complete his game will be when he makes the outside shot more of a weapon.

Athletic and long, the buzz words in the recruiting business, are very applicable to this young man. Brandon is a wiry competitor, he has a solid shooting stroke, he rebounds well using his length to his full advantage and uses the dribble very effectively to cover ground when scoring in the paint. He obviously needs to fill out and add more strength, a note that each and every evaluation was sure to focus upon, and when this happens he will be a force to be reckoned with for sure. He also needs to work on his opposite hand, making it a scoring option in the paint. I have no doubt Brandon will be a sought after player and land at the proper level to allow him to flourish in college.

"Strong lead guard with good to great defensive and on ball skills" was one evaluation turned in for the rising sophomore from Chattanooga. His defensive prowess was the focal point of every evaluation including mine. He was a nightmare on the ball defender, moving his feet to cut off penetration and challenging every shot. His point guard skills caught some attention as well, he showed good handles, made solid basketball winning play decisions and was at his best against pressure. His size was not an issue as he had some strength to overcome some of those shortcomings, especially against bigger offensive guards. This kid might be a consistent outside shot away from being someone we talk about a great deal in the next few seasons.

"Working hard to be fundamental" was one evaluation quote for the rising sophomore. All signs point to being a good shooter, set shot mechanics need to be worked on as he advances up the varsity ladder, quicken his release and move more efficiently without the ball on offense. At his size, point guard is his calling, he needs to work on his lead guard skills, passing, decision making and getting his team into their flow. It is fine if have the scoring touch at your disposal. Defensively he is not bad, one of the few documented charges at the camp, his size can be an issue guarding bigger more athletic guards but his will is not an issue. Get stronger.

Rising freshman caught the attention of onlookers with an emerging skill set from the lead guard position. Excellent handles, ability to get away from and alleviate pressure and a capable outside shooting touch. When evaluating freshman in this setting seeing how they interact against the bigger, stronger high school kids is a key component of the package. Tyler never backed down, despite some obvious size disadvantages he stayed right in there. His shooting form will require some tweaking as he likes to push the shot, he showed some pull-up ability at the foul line as well. Nice young player who, when he gets some size and strength, might be a player to watch in the coming years.

Rising junior seemed to be content with hanging in the background and not asserting himself into the fray. A capable shooter despite an awkward release, he played hard giving effort but never took the initiative to get himself open and create scoring chances for himself and others. Defensively he needs to work on his lateral quickness and athleticism, he has good length and must show more aggression on that side of the floor. He is a player who seems much more comfortable in a structured team setting than a camp environment, where making quick decisions and transitioning from offense to defense happens early and often.

Young Jack showed some offensive skills, he has a decent outside shooting touch but that is predicated on his footwork and shooting fundamentals, when feet are set and release is true he makes a much higher percentage than without. He knows how to create space with his dribble but his lack of overt athleticism and quickness makes it difficult to finish at times. He needs to work on his hand strength. He had a great deal of trouble corralling passes which led to turnovers. His strength is a major issue, which seems to be the common theme in these evaluations. The kid seems to love his time on the floor, he works like he wants to get better, so living in the weight room and working on his skills, handling, shooting and such you will see a marked improvement in his game in the short term.