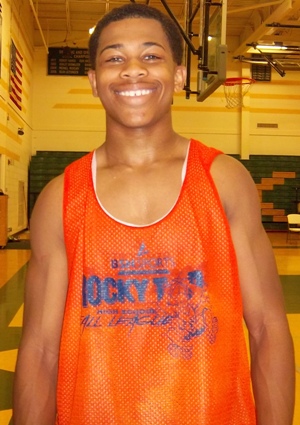 The KnoxVegas Heat sixth annual basketball tournament has
become one of the go to events of the early summer basketball scene.

In the 17 and under division several teams with as their home address participated in the three
day event in lovely .

Although they didn't advance to bracket action several good
things were seen and heard about the participants in this age demographic.

The Celtics finished 2-1 in pool play but lost out on the
bracket spot due to point differential.

In action on Friday night, Jake Allsmiller (CPA) was at his shooting best. The 6'5 rising
senior wing nailed 8 threes on his way to scoring honors as the Celtics seemed
to be rolling along. Braxton Bonds (CPA)
was equally terrific with his aggressiveness and ability to find the open
shooters. He scored when needed and made everyone happy to be playing with him.
Makinde London (Summitt) seems to
have taken a big step forward in his development not only physically but on the
floor as well. Standing 6'7,
knocked down a couple threes and has really started to fill out with his upper
body. Good things to come for this young man.

A lackluster effort in their second contest could not be
overcome as they won their third game but didn't make it to bracket play later
that evening.

The TCF finished 1-2 in pool play winning their final game
against a squad from .
Tyler Yoder (Stone Memorial) was
solid in this one nailing several threes. Mark it down this will be a big
summer for the 6'5 rising senior from Crossville.

Andre Wilson (Austin
East) had his moments as well. We all know he can score but I was impressed
with his looking for the open man and his improved effort on the defensive side
of the floor. Oterriah Lee (CAK), Justin
Simmons (Stone Memorial) and Zak Carter ()
were lauded for their contributions over the weekend as well.

This
based group had a good weekend finishing 1-2 but being competitive in every
game till the conclusion. Levi Woods ( )
was the big scorer in the Friday night loss to Q6 out of with 15 markers. Ben Snider (Ooltewah) and Isaac Merian () also
received mention for their efforts.

Isaiah Campbell
(Bearden) and Jack Graham (Bearden) led a team effort as the Velocity
continue to find continuity and leadership from a tough and scrappy bunch.

This was a fun group to watch as they play fast, hustle on
defense and shoot quick and often...from deep. The Elite posted a big win on
Friday night against one installment of the Atlanta Celtics to the tune of  98-97. Clay
Hertel (DCA) was huge in this one scoring 30 points and leading the way for
the Elite. Nick Young (Greenbrier) shot
the ball well majority of the weekend and was applauded for his toughness and
hustle.

Listed in the program as the Knoxville Panthers, this group
made up of players from the Middle Tennessee area became the only squad in the
17 and under division to advance to bracket play. The Panthers made it to
quarter-final action before losing to the eventual champions Team Impact from .