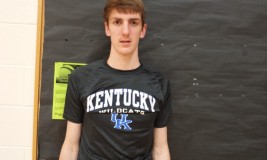 The Nike Memorial Day tournament has always been one of the top event during the Memorial Day holiday weekend. This year was no exception. Teams from all over Tennessee made their way to Atlanta to compete in the event in all age groups.

We will concentrate on the 17 and under division today with big stories on the other two age groups dropping tomorrow.

In the 17 and under division the Tennessee Tigers despite playing a bit shorthanded still managed to make some noise finishing 2nd in their pool due to point differential finished the event at 2-2 losing in their bracket contest to the Florida Tarheels.

The Tigers won their opening pool game and faced their stiffest challenge of the summer against the powerful South Carolina Raptors Elite, winners of the event in the past.

The Tigers behind some sterling play from Ross Cummings (Creek Wood), Jarrell Reeves (Oakland) and James Boone (Kentucky) kept things close late leading 61-59 with just over a minute on the clock.

Boone connected on two charity tosses while Cummings did the same and the Tigers held off the powerful Raptors squad 67-59.

Guard play was crucial for the Tigers and their triumvirate of back court personnel led by Cannon Campbell (Rossview), Gabe Cummings (Creek Wood) and Dequan Summers (Hillwood) all played very tough on both ends of the floor.

Brad Allen (Greenbrier) started the game and got meaningful minutes and timely scoring when on the floor.

The Tigers played on Saturday without Lipscomb commitment Kenny Bunton (Walker Valley) who returned on Sunday and gave them some good solid minutes coming back from an injury.

In other 17 and under action, TGAND Express, a group out of the Memphis area, also finished 2nd in their pool at 2-1 behind some solid work from Romero Hill (Hamilton), Tevin Olson (Mitchell) and Anthony Yarbrough (Harding Academy).

Garrett Sams (Westview) had a strong showing in the tournament for the Memphis Bulls who finished pool play at 1-2. Sams has decent size, can put the ball on the deck and will knock down an open shot. The Bulls got adequate guard play from Justin Benton (Houston), who proved he could knock down the mid-range shot.

Tucker Campbell (Prep School) played with his usual effort and toughness, while 2017 big man Blake Huggins (Obion County) showed a little attitude blocking some shots and fighting for boards. Once his strength catches up and his confidence comes around we may have a nice young player in the 6'8 range.

It was a tough weekend for the Chattanooga Elite who finished 0-3 in pool play. I cant say enough good things about Dejonte Ross (Brainerd). The lanky lefty may have taken some ill advised shots but his hustle and will to win need to rub off on some of his lackluster teammates. Ross played hard from whistle to whistle, he guarded with ferocity and even knocked some outside shots.