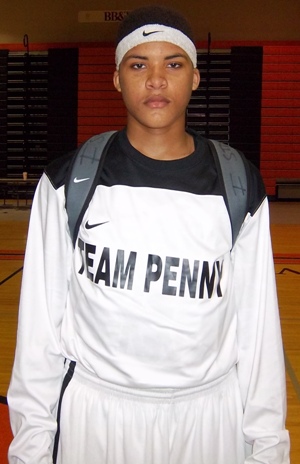 Made up for a lackluster first day effort with a very strong second day showing. Kid has good size and length, he shoots the ball adequately and is not afraid to bang inside. Hate he wasn't there on Sunday wanted to see more of him.

Very good shooter came on late to show he was better than his early game efforts. Bonds understands the game and knows how to get his shot but as he progresses he will need to add point guard skills to his arsenal to become a very effective prep baller.

Long and athletic player who really came on the bigger the outcome. Boyd was huge in the title game knocking down timely threes and playing with passion on both ends of the floor. He finishes at the rim and with strength will be a force on the Memphis prep scene.

Strong point guard skills with some wiggle in his game as well. Brower has a good shot but did not shoot well during the event. His basketball IQ is very high and once he learns a good shot from a questionable one he will be devastating.

Physical inside player who really played well on Saturday helping the Burners win a few games. He plays hard on both ends and can score when he gets his fundamentals in order. He keeps the ball high and makes a good outlet, then runs the floor.

Solid and tough from the lead guard spot, Cambridge made smart basketball decisions and showed he could knock down the foul line jumper to keep defenses honest. Really liked his effort and hustle.

Played much better the deeper the Burners advanced in the tourney. An outstanding outside shooter who will learn the value of what and when a good shot should be attempted. He will need to work on his lead guard skills as he progresses.

Diminutive guard showed he could score with the best of them using an array of floaters, outside shots and short jumpers in the lane. Crutcher is very small which could be a hindrance but he plays tough and gives effort whenever on the court.

Undersized inside player who used his natural abilities to score and rebound with player much larger than himself. Gray is quick off the floor and battles for everything. He will be an effective prep player but will need to add perimeter skills if his size remains the same.

Hayden played his best when the stakes were at their highest. He scored several buckets with floaters and short jumpers and finished in the lane on the break as well. As he gets bigger and stronger his natural position should emerge.

Jackson is a smooth operator who can score form the foul line and in; as well as, on the block or trailing the play in a secondary break role. He battles on the boards and has good size for this age group. He will need to add ball skills if he remains this size though.

Lackluster effort on Friday night was turned around the remainder of the weekend. Jones is a skilled inside player with quick hops and knows how to board the glass. He has strength for his age group and will need to develop some perimeter skills as he moves forward.

Keeter stood out in the teams first contest scoring 24 points with a combination of shooting and getting easy buckets in transition. His shot is adequate but he will need to become more point guard oriented as he advances through the high school ranks.

Great size and strength for this age group. Lowe showed he could score on the block and once he learns footwork and works on catching the ball better, he could be an inside scoring force on the high school level.

Arguably the best athlete in the event. This kid is pure power and explosion, his forays from end to end were superb. He will need to work on his shooting and ball-handling as he progresses as a basketball player. Big time football kid we were told.

Tall, thin and long describe this kid as he blocked several shooting attempts and showed on occasion he could score on the block. He needs to add some finesse to his game and maturity will go a long way for his future on the court.

Wonderful athletic youngster who was really good anticipating the passing lanes on defense and scoring off the dribble on the other end. Moss had a decent outside stroke and was a good passer from the wing as well. His future is bright.

Solid fundamentals from a small guard, Murphy can shoot with anyone and once he adds strength he could be a very nice player on the prep level. His basketball IQ is high level and he knows when to push and when to hold back. Fun to watch.

Excellent shooter who is the obvious product of a coaching family. His basketball IQ is high and once he gets stronger and more confident with his shot he will be a force from the outside.

Lefty with good size and strength for his age group. He found ways to score inside and showed an adequate outside shooting touch. When motivated he played much stronger and tougher with much better production all around.

Big and strong with a surprisingly soft touch from the foul line and in. Stokes knows how to post, score and board. He wants to bring the ball up the court on occasion but lets wait till we are more confident with the dribble. Good vision from the block as well.

Wonderful athlete who takes everything to the bucket and hard. Taylor is quick and really runs the floor in transition. He has decent strength and battles for everything. His ball-handling is ok but he will need to add some perimeter skills as he moves along in the prep ranks. I really like this kid.

Am absolute warrior on the glass, especially the offensive kind. Washington never gives up on a play and will fight for scraps as the ultimate Junkyard Dog on the interior. He finishes plays and keeps possessions alive, he is keeper.

Absolute relentless defender, Watkins loves to defend and its shows in his effort. He is quick, can score using his dynamic first step and will finish at the rim. Played well in the title game despite the losing effort.

Clever ball-handler with the ability to score in bunches when he sets his mind in that direction. Williams was huge in the title game playing with purpose and proving he was the top dawg in this class. Vision is phenomenal as he finds open players at will.

Others who merit some attention: